Imperial Armor vs. "The Process" 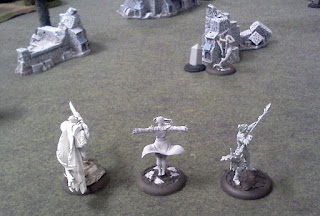 The Virginia crew has started an Anima Tactics campaign. Unfortunately, my gaming grinds to a slow drag come November and December, so I knew I wouldn't be able to really plunge into it with both feet. Nonetheless, David was willing to hike out to Dream Wizards to get me my first game into the campaign, and a good time was had by all.


We're using the "Dark is the Fallen Sky" campaign (PDF available free here.) Rolling for my team's ultimate goal, I got "That Which Should Not Exist." Meaning I have to win the 'Neo-Abomination' scenario five times. Thematic for the Empire, but a sight unlikely.


We rolled for a Clash scenario, and got "The Dark Forest." Short version, beginning of every turn, we roll for every character still standing. On a 9 or 10, that character suffers Seal lvl. 1. Ouch. We'd played it before, and it certainly adds an air of uncertainty to all planning.


200 points. I brought  Tiamat, Kronen (with Raphael's Gift,) Claire Adelheid (with Talisman of Eriol,) and Daniella Meris (with Supernatural Weapon.) Faction advantage of Imperial Armor. Kronen is the Juggernaut, a solid tank, slow, not likely to hit, but will smash some enemies if he connects. Claire isn't as tough, but she's meant to bring in the follow-up attacks, and clean out the weaker opponents with a well-timed charge. Daniella is the artillery, and Tiamat is... odd. He hits well, and has some tricks, but certainly can't stand up to any real damage. 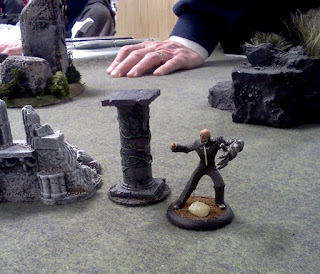 A good man with a mean left hook.

Game itself had a pretty good back and forth. My team was pretty fast, as Empire goes, but with Kronen, the pace is definitely on the slow side. As expected, Wissenschaft was able to set the terms of the engagement, picking where to fight. I just had to rely on my armor to wither the first blows to be able to return in kind. More or less worked.


First casualty was Daniella, who after getting off a couple shots, took  a Dual Buster charge from Lorenzo and his bionic arm on turn two. The second charge cleaned her out, but left Lorenzo hanging out there for a return charge from Claire. Veronica drew a bit more attention from me than she was worth, but also survived a lot longer than she should have.


Things quickly degenerated into an endurance contest, as I'd hoped for. We both kept swinging, but my Imperial Armor held strong. And once he was down to two characters, his Process-enhanced troops were armored up as well. So we threw lots of punches, but no one could effectively take out the other.


End of the game was a tie. I'd eliminated Veronica and Lorenzo, he'd taken out Claire and Daniella. No Influence reward for anyone. Hoping to sneak in one more campaign game before the end of the year, time and the fates permitting. And getting some of my unpainted figs, well, painted.


Side note: for the terrain, we added to the selection Dream Wizards has to offer with my newly-arrived ruins from Advanced Terrain (via the Kickstarter.) Attractive pieces that withstood getting hauled around in my backpack all day long. Highly recommended.

PMMDJ
Miniatures gamer since the early 90's, with a penchant for long-windedness and the serial comma. Used to do CCGs, and RPGs, and ran some larp. And I play the occasional video game. And board game. But it's all about the miniatures skirmish these days.